Growing up in Sidmouth 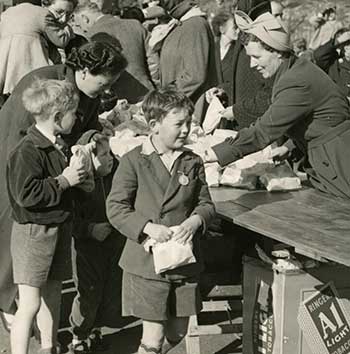 My father was very strict, we had to do what we were told in that little cottage.
In the evenings we sat by the coal fire and sang lovely little songs that he had learnt in Lincolnshire and other places, he would get his mouth organ out and play. We had to make our own entertainment in those days. Talking about it brings me happiness, we didn’t ask for much. We had closer ties with people. People were important to us then. I was a lot happier when I was singing. I wouldn’t mind going back to those times.

I spent the first 10 years of my life in Winslade Road. I remember playing a game called tin can copper. Like hide and seek. We used to stand on a manhole cover and count to 20 then go to find the person who was hiding. We played out in the street all the time, skipping, playing with hoops ,marbles, ball. There was a builders yard at the top of the road and we used to bounce the ball against their wall for hours. We also built camps in the field now (known as the Knapp). We spent all day roaming round in gangs, fishing, cycling, and playing in the woods. There was much more freedom in those days.

I had a friend whose father was the head gardener at Colonel Balfour’s estate, we used to roam around the grounds as if we owned them. One day we were in the garden and Maurice said “Colonel’s coming. We scrambled into a bamboo clump and stood there for ages . He knew we were there so we stood like statues until he went away. Another day it was pouring with rain and the water was rushing down the gully between the two lodges on Station road. We started to build a dam out and out until the whole road was flooded. Again Maurice called the” Colonel is coming” and we started to kick down our dam. Colonel walked past and said “Well done, Maurice. Keep the road clear.”

I regularly used to attend St Francis church 10-30 service . All the children sat in a row of chairs at the front. I remember the vicar starting the sermon, telling the parable of the sowing of the seeds. I put my hand up, “Sir sir” the vicar tried to ignore me but I was persistent . Eventually he said “yes John” “Sir my mother says my ears are so dirty if any seeds get in them they will grow” The church was in uproar and I was teased about that for years.

My grandmother lived in East Budleigh and I was allowed to go and get a kitten from the village and bring it home. I took it to the vet to get it “done” thinking it was a male. This was going to cost 2/6. But it was a female and so the operation would be a guinea(£1 05p) which was a lot of money in those days. I decided to take my toy soldiers to school and sell them to raise the money. The man who lived next door was a reserved worker and used to bring home bits of lead, he melted this down and made soldiers in a mould. He gave me some more soldiers so I got enough money to get the cat done, and she lived happily ever after! What was the cat called? Now there’s another story. My father was in the army in North Africa, when we wrote to him, we asked what we should call the cat. He wrote back and suggested Sousse and Beja. I didn’t realise he was telling us where he was serving, but we called the cat Bejjy.

At 11yrs I joined the scouts. It was run by Mr Colwell assisted by Miss Oldfield. She and her mother lived in Holmdale and we had to go there to get kitted out. Her front room was full of uniforms of all sizes. We used to go to Camp at Rousden and Colyton travelling in the back of an open lorry. We slept on the ground in old leaky Boar War bell tents. One night Bull dog patrol were in the tent, all lying with our feet towards the pole . It started blowing a gale and the tent and pole disappeared. Dougie Nichols grabbed the bugle and sounded the alarm. It was pitch black dark and pouring with rain, so I grabbed my blanket and found my way to another tent. Breakfast was a great billy full of porridge.

I belonged to Girl Guides and St John’s Ambulance Brigade. We went to the hospital to do the cleaning when we were in St John’s. I suppose it was towards getting our badges.

When I went to Guide camp, my mother thought I was going to die of typhoid because I poached an egg in river water and it wasn’t properly cooked.

The fair used to come to Coulsdon road. There were no houses down there then, or in the fields behind. Once it came to the Arcot field. I remember seeing the Dagenham girl pipers and Bertram Mills’ circus. The elephants were all taken down the high street to go on the beach. I bought a new pair of pedal pushers to wear. We went on the dodgems, I kept going home to get more money for the rides but Mum said no, I had had enough!

There used to be tea gardens in Harpford woods and lots of us had birthday parties there. There was a keepers cottage, there was always a fire burning. He used to put up swings and a seesaw. The railway ran through the woods, but it wasn’t near the line, you had to walk to it. We have looked for it but can’t find it now.

There was an interesting character lived in the square at Woolbrook named Churchill. He was made the Air Raid Warden, with a steel helmet and an arm band, he rode a bike so slowly it’s a wonder he could balance . I remember him cycling past saying ” If I was you I wouldn’t bide there, go in and take cover“

Another Mr Churchill who had the farm in Woolbrook kept cows and pigs and chickens and he used to drive them through Manstone to the field where Tyrrell Mead is now. One day the three Wagstaffes and I were playing in the field off the Sidford Road where there was a couple of hay ricks. We were climbing up the ladder and sliding down having a fine old time. They were thatched in those days. Suddenly we heard a voice “All right then you buggers, I got ‘e” it was Mr Churchill on his little horse . We went through the barbed wire fence running like hell, over the iron gate to the High Street. He couldn’t jump over the gate on his horse. I can see him now shouting after us, ” I know ‘e, I knows where ‘e lives”. Then when I used to come out of school I saw him looking over that little bridge at Woolbrook and I had to go all round to get home at Manstone. I did that for a month. When he drove his cows past our house they used to stop and eat the cabbages in the garden. Mother went and told him to stop them and it all came out about the hay rick.