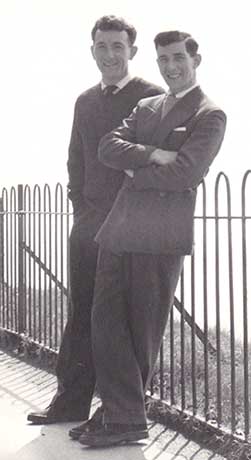 Frank Symington was living in Charlton, near Woolwich when war broke out. A dangerous yet exciting place for a young boy. Incendiary bombs fell in his street and Frank and his pal would collect sand and pour it over the devices to put them out! As his Father was ill an uncle came from Scotland and took Frank age 8 back to Glasgow, he couldn’t understand a word of what was being said. After 6 months he went back to London, travelling alone, and having to change trains at least once.  As he reached his house the air raid warden pushed him to safety as a raid was imminent.

One night as he and his mother were in an air raid shelter a bomb dropped on the house next to their home which was damaged beyond repair.  They moved but when the second house was also bombed, an aunt living in Sidmouth asked them to move down here until the war was over. Frank’s  Father had recently died so he, his Mother and older brother moved to the town. They lived at Miss Barnard’s old lace shop next to the Anchor. Miss Barnard made lace for the royal family.

Because of the war Frank hadn’t been to school for 15 months. He had a job and earned enough money to buy 10 comics every week. He started at the Parish Hall school in Mill Street when he was 10 1/4 and here, as he lined up on the first day, he met Les Cody, with whom he has been friends ever since. They then went to All Saints.

Frank  passed the 13 + selection test to transfer to Kings School Ottery St Mary, but as he had missed a lot of school he was in a class of 11 year olds.  He was never happy and he found it hard to catch up.  Eventually  he returned to Woolbrook School where he became head boy. When he left school at 15 he was apprenticed as a plumber to Ernie Pimm. The war continued but the family was a lot safer than in London and Frank’s Mother worked at the Marlborough Hotel.

Frank recalls seeing a red glow in the sky over Exeter when the bombs were falling, an incendiary device landed  near Bulverton farm and a Lancaster bomber crashed on Core hill! There was scaffolding placed across the seafront to stop the Germans landing on the beach. An army assault course was set up at the Knowle and the boys used to play there and sometimes found spent  bullets in the grass. When the family  lived at 30 York Street, at night Frank would sometimes see the silhouette of German  planes flying overhead as they went out to sea to jettison their bombs. The American GIs came to Devon and were staying at Dunkerswell. Frank was working at Macfisheries and had a delivery bike, he and  Des Bridgeman used to cycle out to Dunkerswell to see them. They were very friendly and generous Des and Frank were given fruit, chewing gum, a dart board and football.

When Les and Frank were called up for National service, both went into the RAF, although not together they would meet up  whenever they could.  Les was a mechanic but Frank served in Singapore.