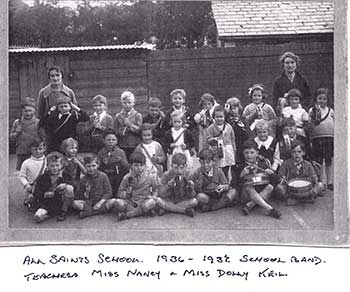 We all walked several miles to school. Mum came to start with, but then I just went with older children. I was very shy and hated school. My older brothers went to the village school, but I was sent to a private school. I walked five miles there and back, the bombs were dropping all around. There were mostly lady teachers as all the men were away in the war. Sometimes we were taught by the older children. I remember a swarm of bees landing in a tree in the All Saints playground.

Gerald Counter came and collected them in a box and took them away. The whole school was out to watch how he did it. When more children from Sidmouth went to  Kings School we went by bus. Once my mum was staying in Ottery to look after Auntie Blanche who was poorly. I decided to go and see them before school started. As I walked up past Coles to aunties house I met the Head Mistress, I said Good Morning but she completely ignored me.  When I went to school I was called into her office, I was told that she never spoke to children in the street who where not wearing their school hats!!

When we left Kings school, on the last day we all threw our hats into the river at Tipton St John.

Once the boys put flour and water on top of the door to drop on the teacher when they came in the into the class room. They also locked her in the stationery cupboard.

I was bullied at school and took up boxing so I could defend myself. I left school at 15, lived in Ashridge. Greenline buses brought the wounded from Dunkirk.  General de Gaulle lived in Ashridge and used to give my friends and I cakes.

My first school was on my doorstep.

We had whale and horse meat for school dinners.

I was at a convent in Funchal (Madeira) age 4. The nuns were very kind, I left at 13 to work in my uncle’s cafe.

We had bottles of milk everyday at break, they used to freeze in winter and the teacher put them in front of the gas fire to thaw out.  In the summer they would be warm. I have hated drinking warm milk ever since.

We had the cane if we were naughty, and had to stand in the corner with a dunces hat, or you were sent outside the door.  The teacher hit your hand with a ruler if you couldn’t answer the questions.

We had elocution, deportment, and rhythm dance in our all girls school.

When I was 11, I played rugby in the rain and then it was so cold my shirt froze.

I remember not being able to do my times table and having to stand on my desk.

We wrote on slates with chalk when we first started, then with pen and ink, the ink monitor had to fill up the inkwells  in the desks.  The blotting paper was pink. Our hands were always covered in ink when we went home.

Some of the children still wet themselves and had to sit on cardboard or pages from the newspaper.

If I didn’t go to school the attendance officer used to come round to the house.

I was top of my class and passed the scholarship to go to the grammar school. My teacher begged my Mum to send me,  but she couldn’t afford the uniform so I never went. Mum did sewing and I used to deliver the dresses, she said to make sure I got paid or we couldn’t afford any food.   I left school at 13 and went to work.

I went to All Saints infants our teachers were Miss Dolly Keale and Miss Nancy Keale.

I went to Kings school and I found it hard, one afternoon I decided to skive, I went and hid in the bamboo canes in the bottom on my own. I sat there all afternoon and it dragged and it dragged. then I joined the others when it was time to come home.

I didn’t like going to school and I ran away and hid in the mangle shed. We went to the secondary school at Woolbrook , we called it the “Academy” because all our friends said they went to King’s school or Colyton Grammar. We thought we weren’t very bright and the only teacher who liked us was Mrs M. She used to send me and my friend down to the shops to buy her strong cigarettes. She was the sports mistress. Her husband died in the war and then she remarried. Everyone remembers her very fondly.

Mr Payne was the head master at St Nicks(which was on the All Saints site) when I was there. When I was about 10 my friend Veronica and I had the responsibility of taking the weeks dinner money down to the Exeter savings bank on Friday afternoon.

On the last day of term we would sing: